The engines that bear the name SORIANO, actually weren't built by the R.SORIANO S.A. factory. During the late 40's and 50's Ricardo Soriano SCHOTZ (marquis of Ivanrey) was involved with the manufacturing of smaller moped types of motorcycles, and other types of gasoline engines, such as generators, pumps, industrial gas engines, and small outboard boat motors. The company that manufactured these engines was called R. SORIANO SA based in Mardrid Spain. The R.Soriano SA company didn't exist when the R.Soriano racing outboard engine was developed. 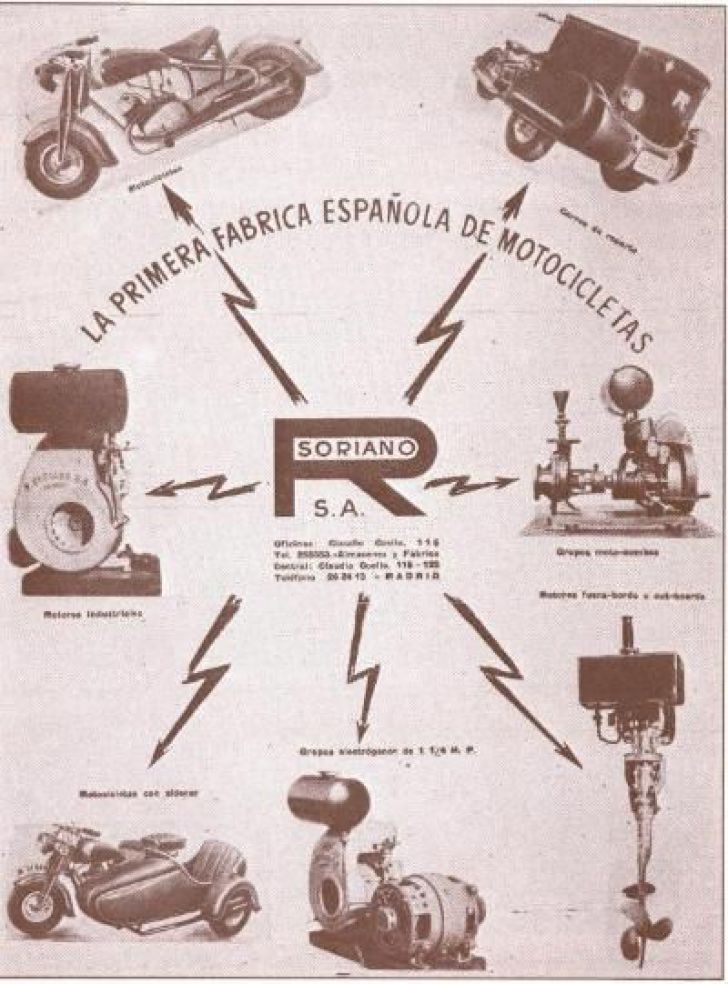 The creation of the first Soriano: The 4 cyl Single overhead cam

(1933-1939) When Soriano abandoned his outboard projects Jean Dupuy of France took over and kept improving the Soriano with the help of Bonnemaison. They created the 6 cylinder dual overhead cam. It was from then on called a " Dupuy-Soriano" or a "Hors Bords Jean Dupuy". Dupuy was not a fan of the Dual prop, and together with Bonnemaison they developed the 4ft long angled single prop drive with which the world speed record was held in 1939. It was also used during many races.

(1945-1956) After the war most of the pre war Sorianos and Dupuy-Sorianos went to Italy. Soriano, Jean Dupuy, and Bonnemaison out of the picture, the Romani brothers started improving the original design on their own. The motors were then called "Romani-Soriano" or simply "Romani".

Ricardo Soriano's most impressive achievement was one of his first. His eccentric outboard ideas became reality during the winter of 1929-1930 with the help of engineer Paul Bonnemaison. Bonnemaison was involved in the development of many race car engines, step hulls and large race boats of the period. He was able to accommodate the Marquis, and designed the first Soriano Outboard. The Soriano racing engines needed to be built in an advanced precision work shop.
The first Soriano was built by OSSA in the spring of 1930. The OSSA company was manufacturing cinema projectors in Barcelona at Calle Viladomat 199, and was capable of taking on the task of constructing the R.SORIANO outboards.

The first race was held during the summer of 1930 at Biarritz in France. It was officially presented at the NAUTICAL BOAT EXIBITION of LONDON in October 1930 as the "R. Soriano" outboard motor. It was a 4 cylinder 4 stroke 658 cc supercharged motor. It developed around 65 hp at 6000 RPM. It had the option to be unsupercharged to allow flexibility to run one engine in 2 different classes. The supercharger was easily removed and the conversion could be made in just a few minutes.

12 were built by the OSSA company, and today 3 remain. They where sold only to members of the Bayonne Canot Club, in South-Western France.

Below: The Soriano photo album of the production process 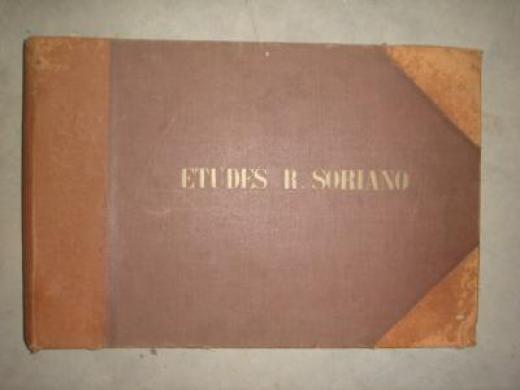 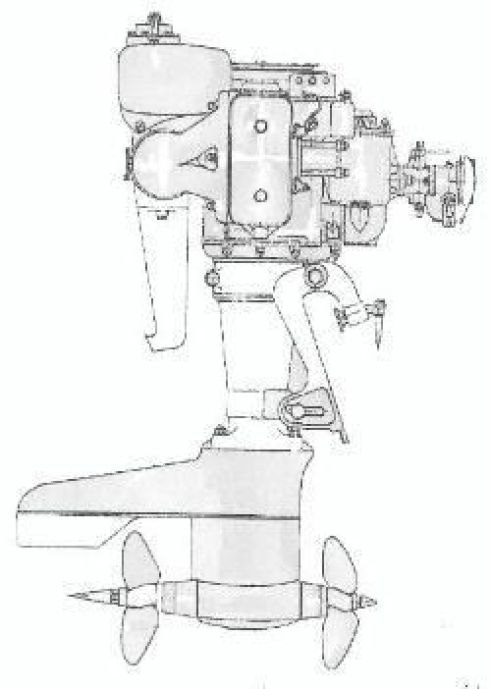 Side view of the 4 cylinder Soriano. This is how it looked when it left the factory in 1931 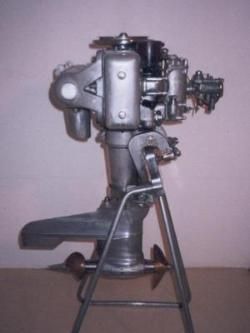 One of the two surviving examples. This motor is one of the last of the 4 cylinder Sorianos built. Full casted exhaust manifold (early version had 2 covers on each side with 3 nuts) and overhead cam covers with 2 nuts. (earlier models had 4 nuts). The original tank was made out of aluminum. It didn't hold enough fuel for a long race, and a fuel pump was used to fill it from a larger tank in the boat. Bottom of exhaust tube cut to reduce back pressure. Most motors had entire muffler removed. 2 Brass Propellers.

There are 2 complete motors in existence, one burried in a wall, and one in a museum. 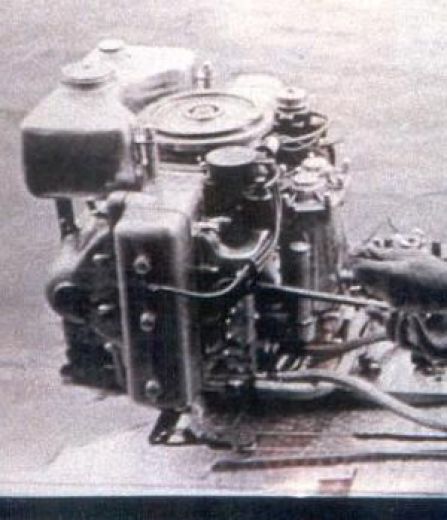 In mid 1931, realizing that the performance of the 4 cylinder could be easily improved, Ricardo Soriano ordered the modification of the original 4 cyl.design by adding a bank of cylinders creating the 6 cylinder "R.Soriano" motor. Everything was simply stretched upward 5cm. The first models had the same lower unit as the 4 cylinder and a supercharger almost identical to the 4 cylinder but capable of feeding the 6 cylinders. The Scintilla Vertex magneto was also still driven by the accessory drive (just left of supercharger, the accessory drive was later used to drive a fuel pump, or simply used as a spot to mount the oil filter and sometimes simply decommissioned, but the Tach RPM function was usually still functioning). Tach/RPM cable visible lower left of motor. Gas tank also identical to the 4 cylinder

motors. There are only 2 of these still in existence. 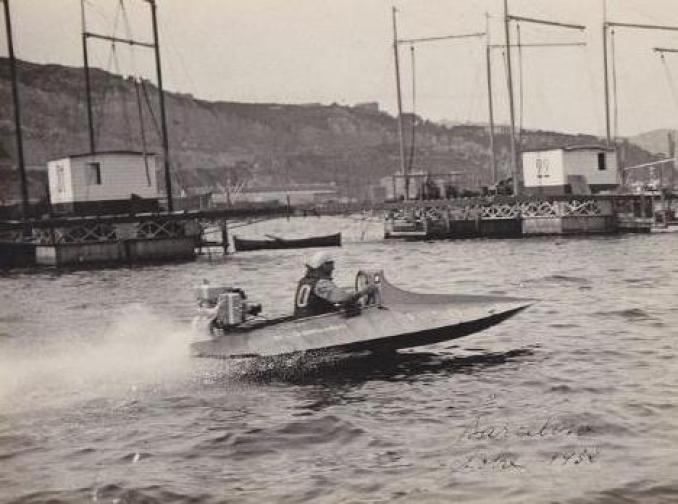 Nice view of the early 6 cylinder Soriano. It has the original smaller supercharger, magneto driven by the accesory drive, and has the same lower unit as the 4 cylinder Soriano. This lower unit turned out to be too weak to whistand the tremendeous torque of the motor and a more solid lower unit was adapted in 1934

Jean Dupuy standing next to a brand new Soriano rig. The engine is an early 6 cyl. See below. 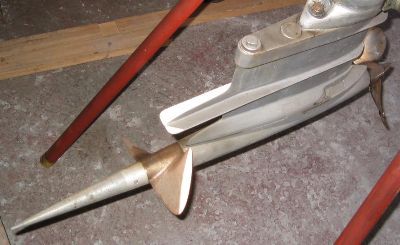 This was the type of Lower unit used on the SOHC Soriano, and on the early Dupuy-Soriano aka Hors-Bords Jean Dupuy motors. (1933-1935) 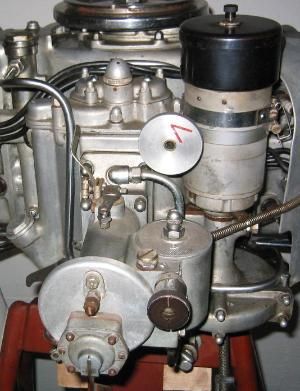 This picture shows the last Soriano modification. The early 6 cylinder Soriano had a small roots supercharger . The last Soriano modification was the improvement of the supercharger in 1933. The later versions were bigger increasing the intake pressure producing a 100hp motor (100hp for 61 cu. in). (There are only 4 Sorianos that exist with this type of supercharger). It also included a drive to power the Scintilla Vertex magneto (right), and the original accessory drive (far left) was decomissioned, and on this particular one it is being used to mount the oil filter. On the "Jean Dupuy" motors (Dual Cam Soriano) and all the "Romani" motors, it was used to drive the fuel pump. (orange device below) 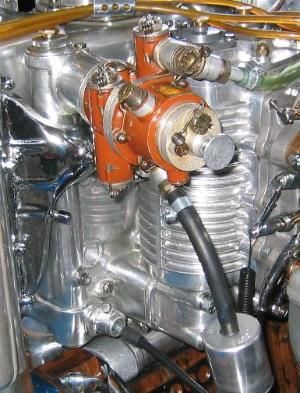 The bottom portion of the accessory drive was allways used to send the RPM signal to the Tachometer. (bottom cable) . The chromed steel intake manifold was created by "Romani" . Original Soriano manifolds are made out of aluminium. The Supercharger on this Romani motor was developped by Romani. It has the very distinct cooling fins, to improove cooling.
The 6 cylinder single cam Soriano's also saw different applications. One was mounted as an "inboard" engine for a race boat.
Manuel Giro of OSSA mounted one on a motorcycle, with no success. Later that engine was mounted on a BMW side car and won the Spanish Championship just after the war. 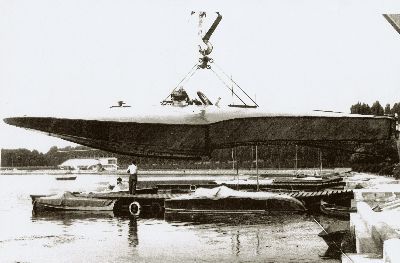 Casalini Experimental.
San Marco Hydroplane of 1953 at the Idroscalo in Milan. 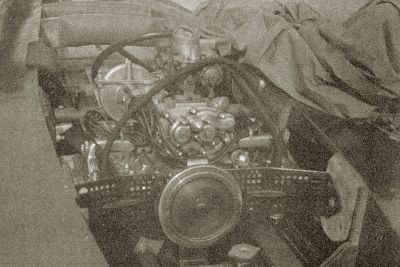 6 Cyl. Soriano mounted on it's back
The exhaust would simply vent in the boat. 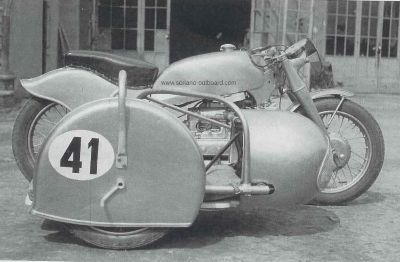 Early BMW side car with a SOHC Soriano. The Soriano used was of the early type, with a smaller supercharger 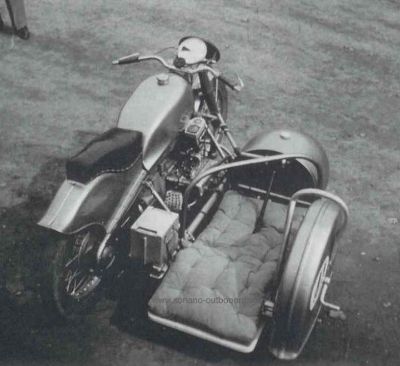 Note the Single Cam Soriano engine mounted on the motorcycle

During the mid 30's Spain was in a period of upheaval. Ricardo Soriano had to abandon his outboard building project and sold all his drawings parts and patterns. That is when Jean Dupuy, 34 of France stepped in. He had the funds and the desire to support a future for the engine. He moved all the tooling near Paris at 24, rue Carnot, La Defense, Courbevoie. There in 1933 together with the original Soriano engineer, Paul Bonnemaison, they developed the Dual Cam cylinder head, the motor was then in 1934 named a "Horsbords Jean Dupuy" that name was casted on the cylinder head camshaft covers. The engine remained relatively unchanged until 1936. That year a large oil tank was mounted on the rear of the engine. The larger tank allowed the engine to run cooler for a longer period of time, as it had a tendency to overheat due to the small oil tank capacity of the driveshaft casing. Also a 4ft long angled lower unit was developed. It had a single prop, and the gearbox was mounted above the water just below the engine. With that setup and a Jacoby boat, Jean Dupuy held the world speed record on May 20th 1939 at 79.04 mph, with the downwind leg at over 84 mph. Then came World War II

Monaco, April 1937  Below, you can clearly see the large oil tank, and the new lower unit. 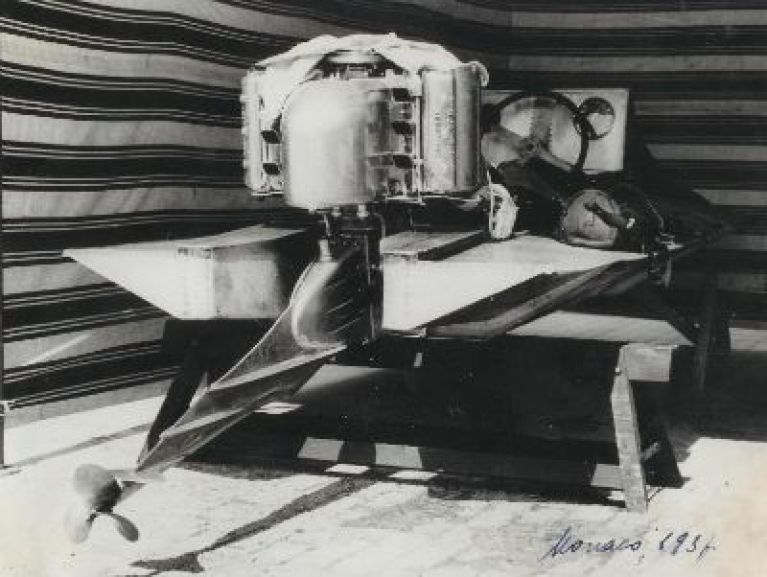 The Long lower unit, was great for the straight runs..

but Dupuy lost a race in Monaco due to the large radius turns he had to acomplish.

A true powerhouse. A twin Dupuy-Soriano rig with a wide Bonnemaison Hull. Unfortunately the power to weight ratio almost remained the same as the single engine rigs. The two engines decreased the reliability of the top performance required for this rig to be successful. Identical power output was almost impossible to get between the two engines. Later Dupuy realised he would have more success by using the best of the 2 motors on a smaller boat. However, the twin set up gave him more reliability for the endurance races.

Forbes had his mechanic set up a custom supercharger from the auto racing industry in 1935 with a Vacturi Carb.

The remains of Forbes's Soriano....

In the Spring of 1942 the U. S. Army Corps of Engineers of Fort Belvoir, Virginia approached us requesting a high-powered, rugged motor to be used on personnel attack boats that later became known as Storm Boats. We responded by building up several 4-60s with magneto ignition, modified to produce about 50 hp at a speed range that would ensure long life, great dependability, easy starting, and good speed. A heavy-duty service lower unit was developed with side fins to protect propellers against barbed wire, shallow, rocky beaches, and especially to be able to withstand the heavy shocks of beaching on any kind of a bottom at full speed. Typically, we ran into difficulties. Our 50 hp Storm Boat Motor, as it was later called, was not what the top dog had in mind. He had heard of the Soriano, that remarkable 6-cylinder, 4-cycle supercharged outboard that Jean Dupuy had driven to the world's mile trial record of 79.04 mph, and he wanted to give it a tryout as power for the assault boats being considered by the Engineers. Gar Wood, Jr., a well-known pre- WW II outboard racing champion, had imported a Soriano which he loaned to the Engineers for tests, and these tests turned out very well. As a result, Gar Wood was given an order to build two for further test work, since, because of the War, it was impossible to get more Sorianos over here or in Europe either, for that matter. Paul Wearly, also a well-known outboard racing champion, worked with Gar Wood in building American adaptations of the Soriano for the Army Engineers at Fort Belvoir, Virginia.

Paul Wearly wrote as follows regarding the Sorianos which he helped build:

"This was a great engine and performed very well at all speeds. We built it with a very effective full gear shift forward, neutral, and reverse. The carburetor was a Holley-Ford "6" type with fixed jets. The ignition was a Scintilla with automatic spark advance. The powerhead weighed 90 pounds, and we developed almost 90hp on alcohol fuel before we reduced the size of the supercharger to run on gas. Before reduction, the inlet manifold temperatures were much too high to run effectively on gas "

Following tests on the Gar Wood built Soriano, Evinrude, and I presume other outboard manufacturers, were asked to quote on a quantity of several hundred Soriano adaptations for immediate delivery. We knew nothing about the Soriano outside its excellent mile trial performance. It was a handbuilt motor, with only rudimentary tooling. Neither we nor anyone else had any production tools for it, nor could the Army Engineers tell us where tools could be had. To set up from scratch to produce the Soriano in the volume required would take over a year, and the Engineers wanted delivery in three months. We declined to quote with regrets. Apparently the Engineers received a negative response from all other manufacturers whom they may have contacted, as no volume order for a Soriano-type motor was ever placed. 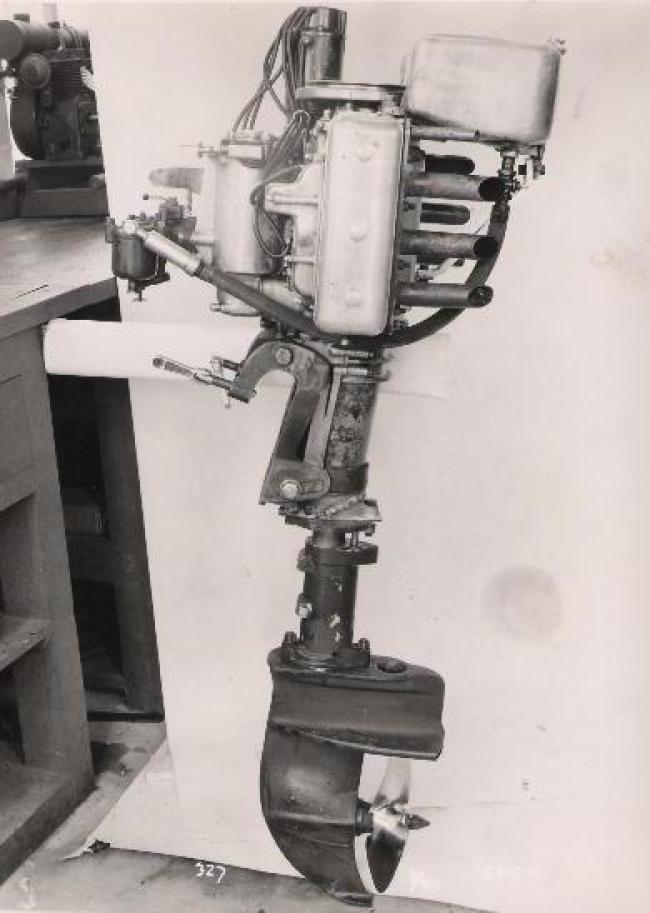 Gar Wood's Soriano being modified to become a Storm Boat motor prototype.
It still has the original super- charger, and oil tank. 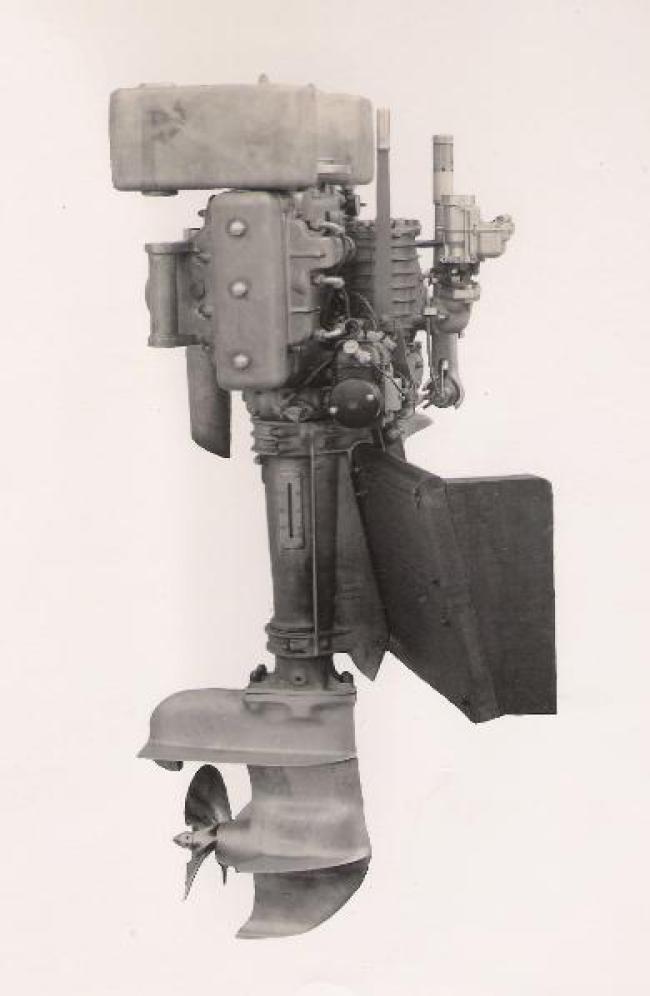 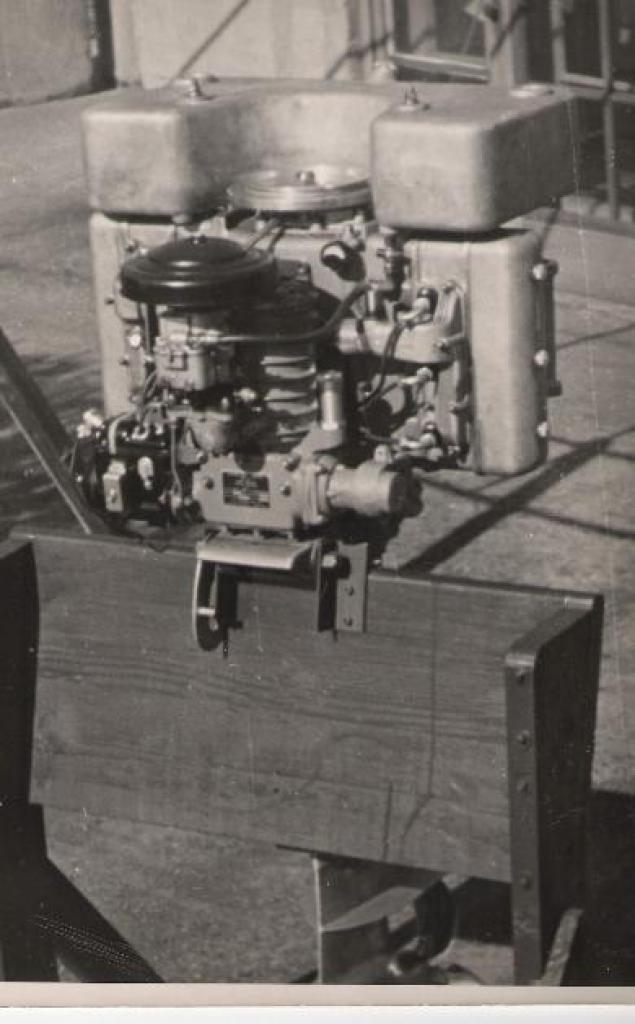